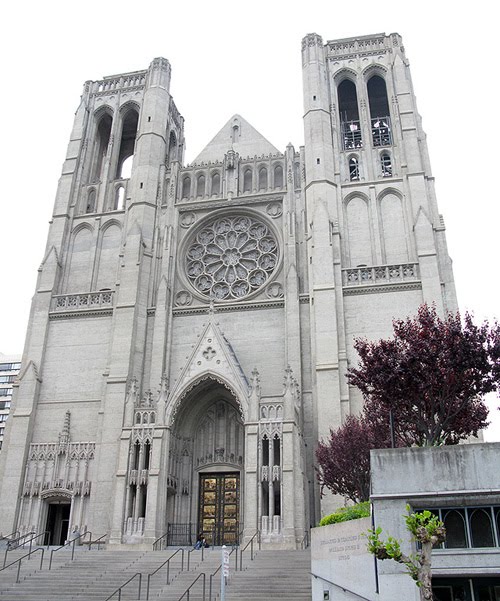 The exterior of Grace Cathedral, late 12th and early 13th century French Gothic in inspiration
As part of an ongoing exploration of my great-grandfather's wood carving, yesterday's visit was to the landmark Grace Cathedral, atop Nob Hill in San Francisco.

I had previously posted some early photos of Sam in the studio with the magnificent organ covers, but had never actually visited the church. 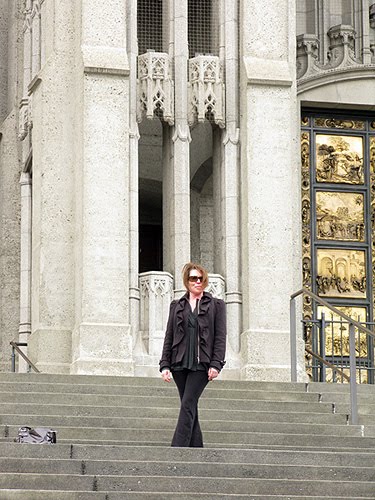 Renee on the steps before entering the cathedral

My friend Renee and I started out early in the morning with an appointment for a private tour with Michael Lampen, the church's archivist. Michael has been with Grace Cathedral since the 1950's, and is a wealth of knowledge. He even had information in his office about my great-grandfather and family. 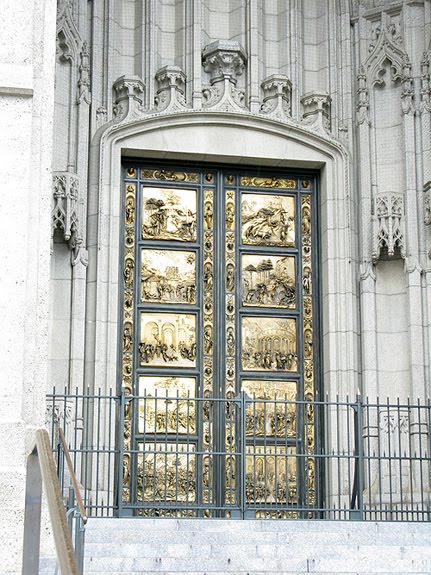 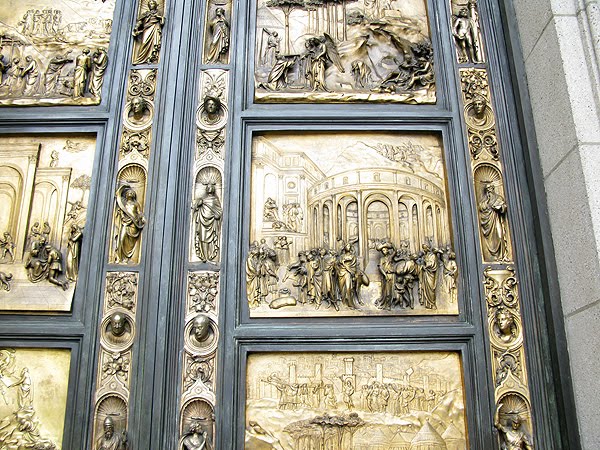 The main cathedral doors are gilded bronze replicas of originals make for the Bapistry of the Duomo Cathedral inn Florence, Italy
Unfortunately, it was a dark, rainy day and my camera didn't work too well. I'm going to have to return with a professional photographer and add to this post.

Grace Cathedral, an Episcopal church, is nothing short of awe-inspiring, from its concrete exterior and gilded bronze cathedral doors, to the massive high ceilings and stained glass-laden sanctuary. It is the third largest Episcopal church in the United States. 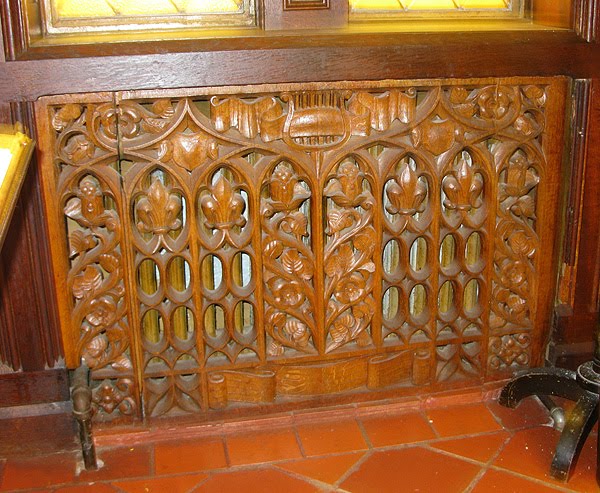 Michael spent almost two hours with us touring this magnificent church, from special back rooms to the breathtaking sanctuary. He went over every detail including important artists' contributions such as Benjamin Bufano, Dirk Van Erp and Charles Connick.

In addition to the larger work, small pieces of Sam's work are all over the cathedral such as this detailed piece above. 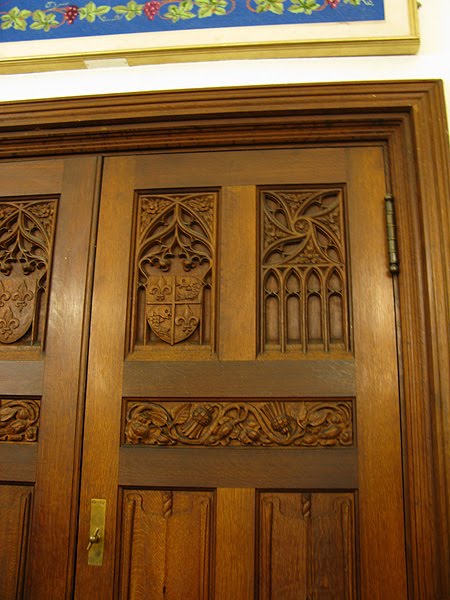 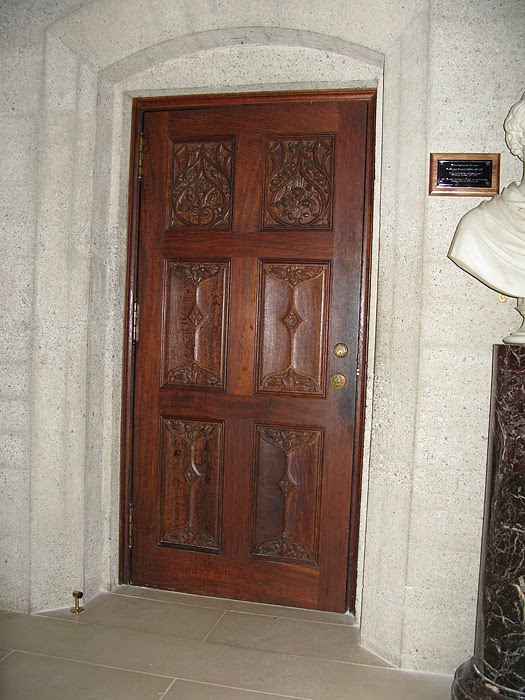 and some additional doors in the back of the cathedral... 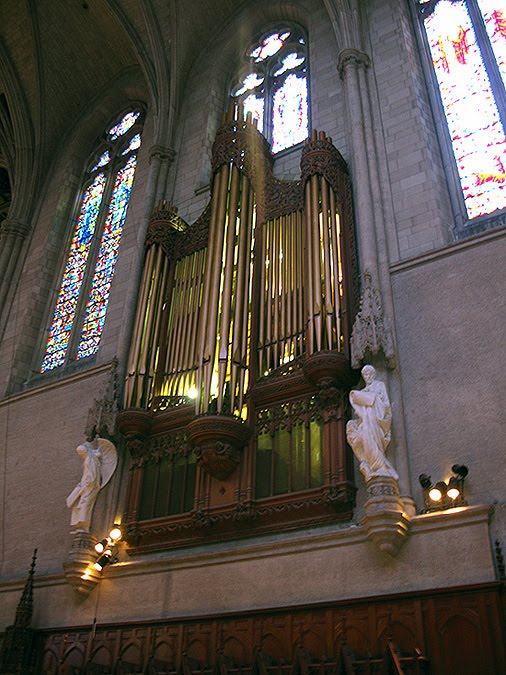 I gasped as I looked up at the massive organ covers that my great grandfather carved. Speechless, I could hardly take out my camera. I can only imagine what these look like when the sun is gleaming through the 68 stained-glass windows and the cathedral is bright. early photo of Sam in the Pacific Manufacturing Studio, S.F. where the carving was done

"An often overlooked aspect of Grace Cathedral's great organ are the two spectacular English oak screens (1935), designed by cathedral architect Lewis Hobart and carved by Romanian-American master carver Samuel Berger. Weighing a total of 14 tons and assembled without metal nails or screws, they rise on either side of the choir, enclosing the two organ chambers. Carved detail includes robed figures holding songbirds, angel musicians playing instruments, dragons, and a profusion of foliage wreathing the upper portions of the screens." - Michael Lampen 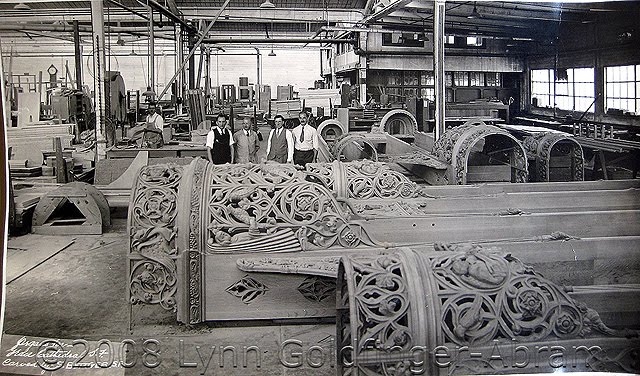 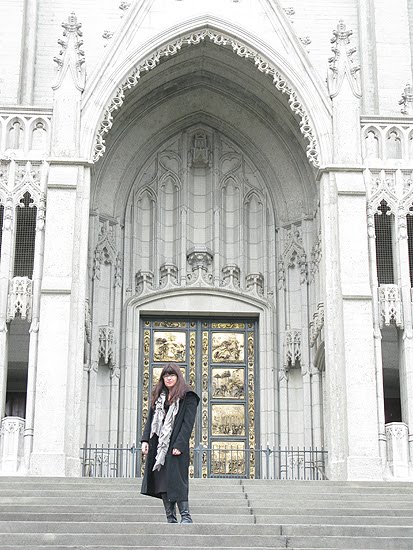 So, that was our day at Grace Cathedral. Breathtakingly beautiful to say the least! Definitely going back for more photos. Special thanks to Michael Lampen for the most fascinating tour.

If you're visiting San Francisco, I highly recommend you going to see Grace Cathedral. It is truly magnificent! Again, thanks for joining me!

A Gift Wrapped Life said…
What a wonderful journey for you Lynne. I am so happy that you are able to do this walk through your family history and see your grandfathers work. And really great that you have such a great photograph of him. XO
2:08 PM

Mary Ann said…
wow, this is quite historical...one good thing about blogging is capturing these huge accomplishments from your family and sharing them with us. i'm saddened when i saw a picture of you and your grandma. i have a 90 year old grandma still living but out of the country. i really want to see her soon! love your blog and your shop. i am your new follower. verbena cottage
3:16 PM

Jacqueline @ HOME said…
WOW Lynn,
You have such a wonderful family history. You must have been so proud to see your Great-grandfather's work.... and, it is magnificent work. I can never believe that a human being is capale of such magnificent carving.
... and, what a beautiful Cathedral. As I scrolled down and saw the doors I thought, they are so similar to the doors at the Duomo in Florence and, that's what you said !!
We have been to San Fransisco, but we didn't visit this Cathedral. I definitely will when we go again.
A fasinating post, Lynn. I loved reading all about it. XXXX
3:51 PM

lisa golightly said…
Here I sit in from of my computer screen and I am speechless ! I can only imagine how it must have felt seeing this in person AND knowing is was your own grandfather !!! This is number one on my list next time in the city. Thank you so much for sharing what you are learning. Lisa
4:55 PM

Cashon&Co said…
wow. again, wow! those front doors are uh-maz-ing.
also i love seeing the old pictures of his workshop!
5:42 AM

Overlooking Mississippi said…
Wow..this is your grandfathers work...amazing..I visited Grace Cathedral visiting SFO few months ago. The doors were so beautiful; everything about the church was breathtaking!
8:03 PM

Fiona Cartolina said…
These pictures are incredible. The carvings in the work shop are amazing - I was just showing my husband and he's marveling at the pictures too. Work done on a massive scale like that is so inspiring. What an amazing legacy.
Thanks
F.
7:18 AM