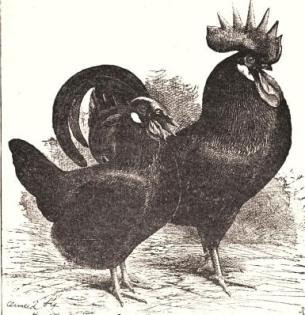 Another great Thanksgiving menu from the 19th century. This is taken from Ingall’s Home and Art magazine, 1889. Fun!

HINTS ABOUT PREVIOUS PREPARATION. — GOOD CHEER IN ABUNDANCE, AND TIME FOR ENJOYMENT. (excerpt). The following bill of fare contains all required by traditional formula, and even more. The entire menu may be prepared with the assistance of one servant, or may be reduced to suit the convenience or resources of those who have no assistance. Everything in the list, before the roast turkey, may be omitted if desired, there may be a reduction in the variety of vegetables, or the pudding may be left out without transgression.

As this yearly festival is pre-eminently a family gathering, much of ceremonious serving may be omitted, adopting the old-fashioned custom of placing the substantial dishes, with their accompaniment of sauces, salads, pickles, jellies, etc., on the table at the outset, the dessert appearing when required. This old-time practice lends to the table the appearance of plenty and hospitality in keeping with the day, and affords the hostess the opportunity of social enjoyment and festive freedom so conducive to the highest enjoyment of the guests.

(Caution: This section contains storage practices now regarded as highly unsafe) To avoid over-work and confusion, let everything possible be done before the day arrives. The turkey should be made ready, and the stuffing prepared, on the day before, and kept in a cold place till next morning. The salad and the dressing for it may be prepared, and kept separate in a cold place — the dressing being added when placed on the table. The chicken pie may be baked and the oyster pie also, and re-heated in the oven next day. The mince pies will be better if baked a few days in advance, while the pudding may be made weeks beforehand, and steamed an hour and a quarter on the day it is eaten. The pumpkin filling may be previously prepared, and the pies baked next morning before the turkey. Both jellies may be made two or three days in advance. The fruit may be wiped, placed in dishes, and set aside; the nuts cracked, and mixed with the raisins in the proper receptacles, and kept cool and moist until they are to be served. Sugar bowls and cruets should be filled. Dishes, cutlery, etc., should be ready to go on the table, which may be set soon after breakfast next morning, and a light cloth thrown over for protection. Almonds, olives, cheese, etc., may be arranged on plates and kept covered. The vegetables may be peeled the evening before, and kept in cold water without impairing their quality. The butter and flour may be rubbed together for gravy, and the ingredients for pudding sauce measured. These precautions taken, will relieve the housekeeper of undue anxiety and fatigue, and render the work comparatively light.

Cream Of Celery Soup. — After reserving the finest celery for the table, select the coarser white blades from that which remains, rejecting the green portions. Boil them till very tender — from an hour to an hour and a half. Rub through a coarse sieve or colander. For every pint of this pulp, have ready three pints of veal stock or chicken broth, boiling hot. Add the celery pulp, with two level “teaspoonfuls of salt, one scant fourth teaspoonful of pepper and a tablespoonful of flour rubbed into two tablespoonfuls of butter. Let it boil up, add one pint of sweet cream or milk, and when it again reaches the boiling point, remove from the fire without allowing it to boil. This soup may be prepared the day before, leaving out the cream, which should be added after soup is reheated.

Oyster Pie. — Line a baking-dish, which will hold three quarts, with a rich puff paste. Fill it up with bread crust and cover with a sheet of the paste, having an opening in the center. While it is baking, put two quarts of oysters into a stew pan, place over the fire, and as soon as they begin to boil, remove, and drain in a colander. Re-turn the liquor into sauce-pan, add one tablespoonful of salt, one-half teaspoonful (scant) of pepper, three tablespoonfuls of butter rubbed into three tablespoonfuls of cracker-dust, let it reach the boiling point, then add the oysters and one-half cup of cream. Let boil gently for three minutes. Remove from the fire and stir in one tablespoonful of lemon juice or good vinegar. Remove the top crust from the pie by parting the edge with a sharp knife, take out the bread crusts, fill with the oyster mixture, replace upper crust and serve hot. The crust may be baked the day before, and twenty minutes before it is wanted turn in the oyster mixture, boiling hot, replace the cover, and set in the oven to reheat. Serve with lemon jelly. An excellent crust is made for oyster and chicken pies by adding three teaspoonfuls of baking powder to a quart of flour, with one teaspoonful of salt, one teaspoonful of sugar, and then rubbing or chopping into it (using a chopping-tray and knife) one and a half cups of butter, or same quantity half lard and half butter. When ingredients are well blended, add three fourths of a cup of ice-water, gradually chopping it in. Roll out quickly, handling as little as possible. Those who fail with puff paste, cannot fail with this.

Lemon Jelly. — Soak one package of gelatine for two hours in two cups of cold water, then add two cups of sugar, the juice of five nice lemons, and the grated rind of one.—grating very lightly that you may not reach the bitter portion. Let it stand, covered, for one hour. Pour on three cups of boiling water and stir until dissolved. Strain through a flannel jelly bag. Pour into moulds, wet in cold water, and set in cold place to harden, or mould in one large form, and when cold turn out upon a pretty dish, and if you wish, garnish the base with a border of bright coloured jelly, cut in little cubes.

Chicken Pie. — For a dish holding three quarts, use two chickens, weighing together eight or nine pounds. After thoroughly cleaning them, separate them into joints, and put them in a kettle, with water enough to cover, to simmer until tender. If not over a year old, an hour and a half will be sufficient. A slice of salt pork, added while boiling, improves the flavour. Remove the chicken from the liquor, and set both aside to cool. When ready to make the pie, remove the fat from the liquor, place the kettle over the fire, adding a tablespoonful of salt and a fourth of a teaspoonful of pepper. When it boils, add three tablespoonfuls of butter rubbed into two of flour, stir until thick and smooth, then add beaten yolks of two eggs to half a cup of cream. Stir into the liquor and remove from the fire without allowing it to boil. Line the sides of the baking dish with nice rich paste, fill with the chicken, sprinkling the layers lightly with pepper, and using about a tablespoonful of salt. Pour over the sauce, which should be about three cupfuls, cover with the paste, having a gash in the center, and bake in a moderate oven for one hour. The pie may be ornamented with pastry rolled very thin and cut into ornamental shapes.

Apple Pudding. — Butter liberally a two quart earthen pudding dish, put in a layer of stale bread crumbs, then a layer of tart apples, pared, cored and chopped. Sprinkle the apple with sugar and either nutmeg or cinnamon as preferred. Add a few bits of butter, then repeat the process till the dish is full, making apples the last layer. Sprinkle with sugar, flavor, and add bits of butter. Lemon may be used for flavouring. Bake one hour. Good without sauce, may be eaten hot or cold, and with cream if desired.

Steamed Apple Or Peach Pudding.— Rub through a sieve one quart of flour with three teaspoonfuls of baking powder, one teaspoonful of salt, and one tablespoonful of sugar. Rub three tablespoonfuls of butter into the mixture, and mix into a dough with one and three-fourths cups of water. Butter a three-quart pudding mould or basin, and line it with the dough. Fill with three pints of chopped apples, add two tablespoonfuls of sugar, and a trifle of nutmeg. Cover with the paste, set in a steamer and steam for two hours and a half. Serve with the plain pudding sauce given in our January number. Dried peaches nicely stewed, make an excellent pudding of this kind eaten with cream, while canned berries are delicious with their own juice for a sauce. Nice for ironing days.

A Dainty Breakfast Dish. — Mix well with two cups of cold boiled rice, one beaten egg, one tablespoonful butter, one tablespoonful sugar, one-half teaspoonful salt. Shape into cakes between the flowered hands, and set away several hours to become firm; may be made in the evening. Fry in nice beef drippings, and sprinkle with powdered sugar.

Walled Turkey. — Line a greased baking dish with cold mashed potato, moistened with a beaten egg and a little milk. Fill in with cold chopped turkey, sprinkle with bits of dressing, pour over it a cup of the gravy, and bake for half an hour.

Anonymous said…
Oh just found your blog by happy accident, I will have to order the BHH hotel tray, I have a love affair with that place, hopefully you ship to Scotland!
9:04 AM