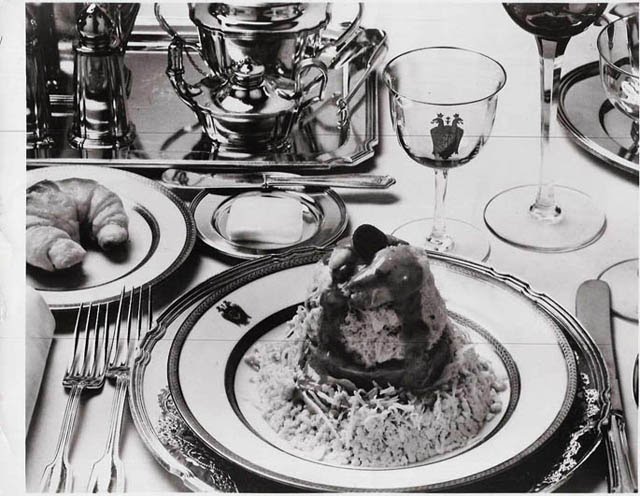 photo from the Palace Hotel, San Francisco
Did you know that some classic salad dressings such as Thousand Island and Green Goddess were invented by chefs from famous hotels such as the Waldorf Astoria & Palace Hotel? I recently posted about the Palace Hotel's 100th anniversary, and thought it would be fun to share some history and recipes from these legendary hotels.

The History of the Green Goddess Dressing 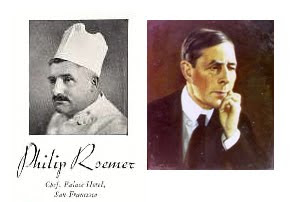 Green Goddess Dressing was created at the San Francisco Palace Hotel in 1923 by Executive Chef Phillip Roemer. Chef Roemer created the dressing for a banquet held at the Palace. The event was honoring actor George Arliss who was the lead in William Archer’s hit play “The Green Goddess”.

Stir all the ingredients together in a small bowl until well blended. Taste
and adjust the seasonings. Use immediately or cover and refrigerate.
Since the dressing was created, the Green Goddess Salad became a
permanent menu item at the historic Palace Hotel. In the early years,
when their was limited access to fresh produce, the dressing was served
with shredded iceberg lettuce, canned vegetables and a choice of
chicken, shrimp or crab.
Over the years the salad has evolved. Today, the salad is referred to as The Garden Court Crab Salad and features farm fresh mixed baby greens, fresh locally grown California vegetables and a generous portion of dungeness crab meat.The salad is offered with a choice of dressings, one of which is, of course, the famous Green Goddess. 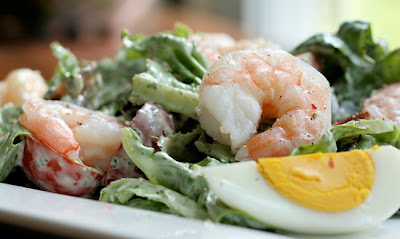 The Legend of Thousand Island Dressing 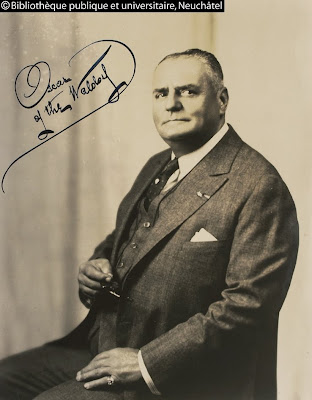 The origin of 1000 Island Dressing is related to George Boldt, one-time owner of the Waldorf Astoria Hotel in New York and of the Bellevue-Stratford in Philadelphia. Legend has it that while cruising aboard his yacht amongst the 1000 Islands on the St. Lawrence River, as his steward prepared luncheon, he discovered that some of the ingredients normally used in his dressings were not available. He prepared a dressing using a variety of ingredients which George Boldt found so pleasing that he decided to have it served in his hotels. 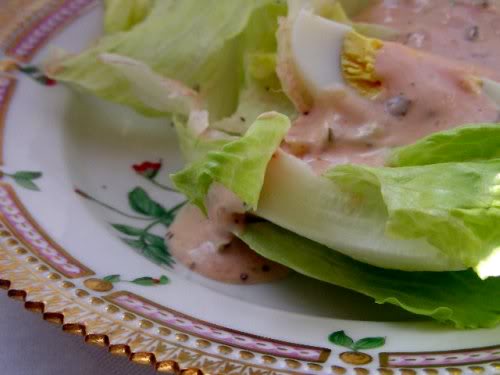 Thousand Island dressing; photo credit here
It was called 1000 Island Dressing in honor of the beautiful area where it was first prepared. The steward was promoted to work at the Waldorf Astoria and subsequently rose to international fame as Oscar of the Waldorf. Oscar's fame as a chef (which he was not, although mistakenly thought to be by many) became widespread not only because of 1000 Islands Dressing, but also such other innovative and improbable creations as Waldorf Salad and Veal Oscar. Oscar was such a loyal and talented maitre d'hotel that in 1912 Mr. Boldt offered him the opportunity to be manager of the Waldorf. Oscar gracefully declined, explaining that he was content as, and wanted to remain, "Oscar of the Waldorf."

Place eggs in a saucepan and cover with cold water. Bring water to a boil and immediately remove from heat. Cover and let eggs stand in hot water for 10 to 12 minutes. Remove from hot water, cool, peel and chop. In a medium bowl, whisk together the chopped eggs, Worcestershire sauce, sugar, vinegar, cloves, mayonnaise, relish, olives and red pepper until evenly blended. Chill and serve spooned over fresh greens. Store in the refrigerator. 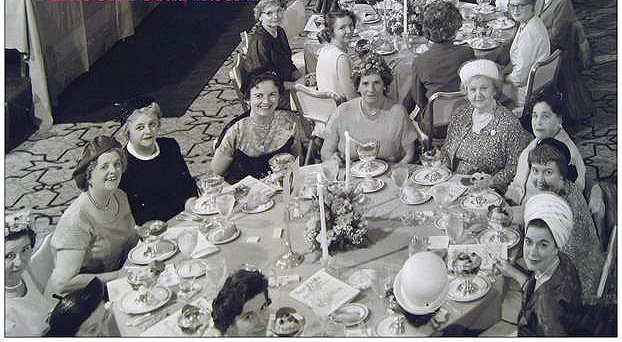 So, as you plan for your holiday parties, perhaps you can add a bit of vintage hotel history by serving one of these classic dressings. I still enjoy Thousand Island on a nice crab or shrimp Louis. Sounds good, doesn't it? But of course, must not forget that sourdough bread!

Jacqueline @ HOME said…
I loved reading about the history of those delicious dressings. I could really eat some of that crab right now. Really enjoyable, Lynn. XXXX
9:50 AM