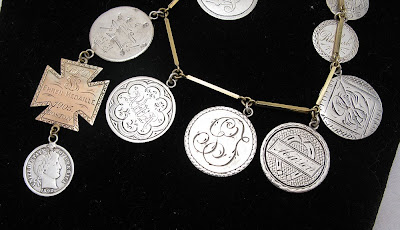 Victorians were exceptionally sentimental and romantic, and were fond of showing it in special ways. Items of apparel such as fans, gloves and handkerchiefs were given meaning as were objects given called 'love tokens' which included flowers, painted miniatures and jewelry. The Victorians romanticized love as well as tragedy. They revered courtship and love, despite their strict moral code and rules of etiquette. 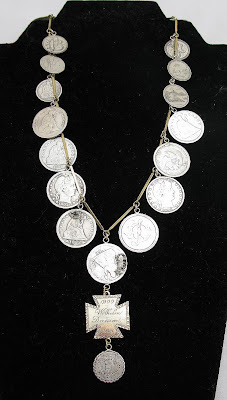 In the 18th and 19th centuries, coins were used as love tokens. They were handmade by men to give to their sweethearts, and in some instances, were given by soldiers and sailors before they went abroad in case they were to die. 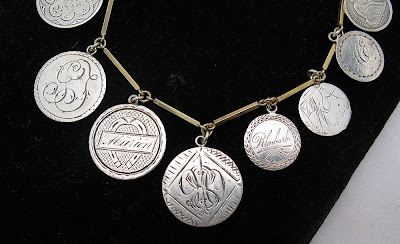 In Victorian times a variety of love tokens were introduced. One would rub down one side of the coin and engrave the other side. The engravings varied from finely designed examples, down to very crude ones. They included symbols of romance, such as hearts pierced with arrows, Cupid's bow and arrow, flowers, love birds and lovers' knots, with either the initials or name of a loved one. 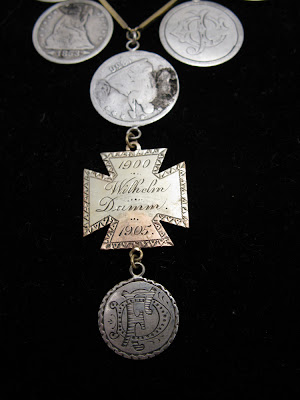 This necklace shown in the photos is a masterpiece designed by my friend Karen. It consists of 22 solid silver love token coins that Karen collected over a year's time. Some have special meaning to her with names or initials that happen to coincide with a friend or relative, or simply a cute token that says "1st Prize." Karen had her jeweler custom design a chain--each a separate link--and add the coins on. It is really stunning in person!

Love tokens bring us back to a bygone era of symbolic love, demonstrated by the gifting of such small and simple coins, yet, with great meaning. You can read more about Victorian love tokens, customs and etiquette here and here. Happy Valentine's Day!

Cottage Rose said…
What a lovely and informative post, I really enjoyed it. And the necklace for tokens, is so beautiful.

Paris Hotel Boutique said…
Thanks so much Alaura. I just love those tokens! Lynn
7:53 AM

Di Overton said…
My mother used to have a bracelet made from silver sixpences. You have got me wondering what on earth has happened to it :(
6:58 AM