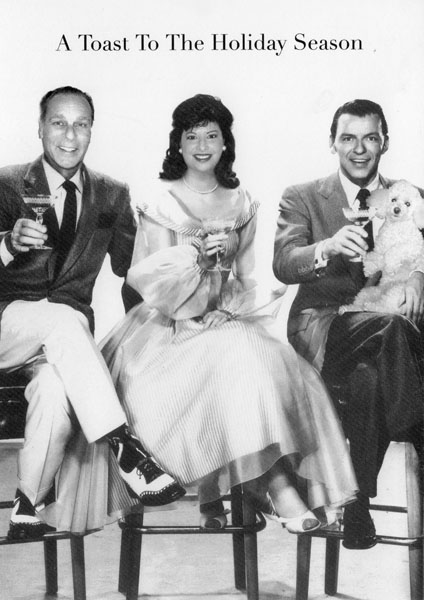 2004 Holiday Card - Toasting in the New Year with Frank Sinatra

This year we're not sending out holiday cards. Since my grandma died recently, I'm just not in the spirit. But, as I was going through her things recently, I found all of the cards she saved from us. So sweet. I thought I'd share some of them with you. 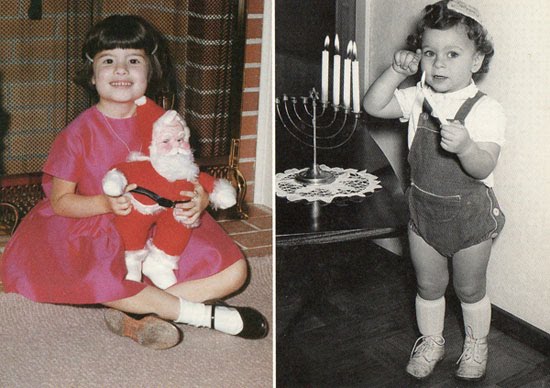 1994 Holiday Card - Us as kids
It's been a tradition in our home the past 15 years to do wacky holiday cards. The card above was the first of what became an annual tradition. My husband Leif and I as little ones, lighting the Chanukah menorah and holding Santa. One in Sweden and one in the USA. 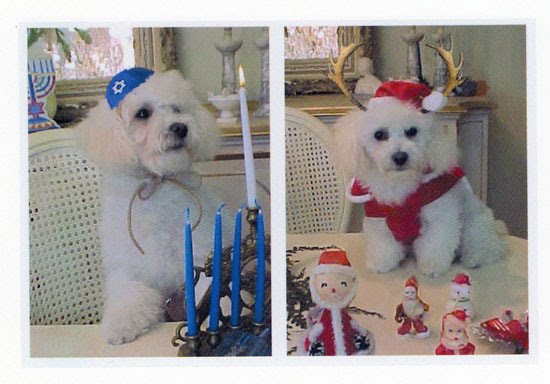 The card above was when Vito was a puppy. My friend photoshopped the antlers. The inside read, "May this holiday bring you much joy and no humiliation." Poor Vito, always humiliated! 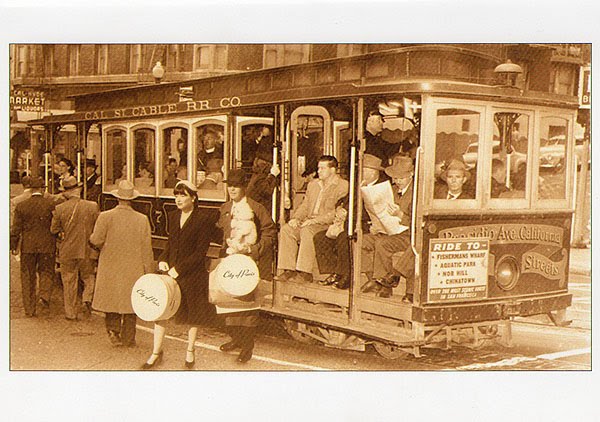 The card above was one of my favorites. I found an old photo of San Francisco in the 1930's/40's. My friend took a photo of Leif and I dressed in 40's attire and photoshopped us into the photo. Vito too. Seriously, we dressed up for this one. Even had the old City of Paris hatboxes, which was a famous department store in downtown San Francisco, now Neiman Marcus. The card read, "For Auld Lang Syne...Happy Holidays!" Hats off to David for doing a great job on this card! 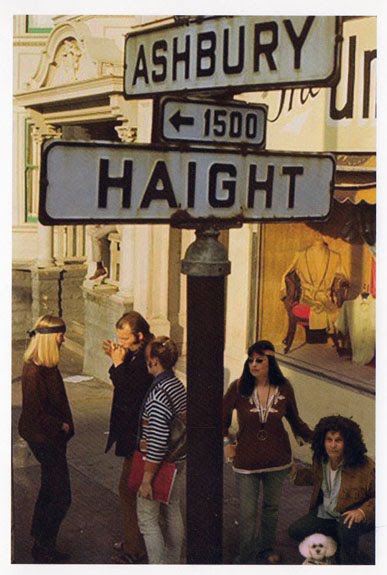 2005 Holiday card- Hanging out in the Haight

In 2005 it was time for a 1960's theme, so I found this photo of the Haight Ashbury neighborhood with people just hanging out. Once again, a talented friend had us come into his studio, photograph us, and photoshopped us in with those 60's people. Leif is the guy on the right with the afro wig. I'm in the brown tunic. Do you see little Vito? The card read, "Peace, Love & Happy Holidays..." Some people that received the card thought that we were really there. Come on...do we dress like that?
So there you have it. A few of our quirky past holiday cards. They may not look like traditional holiday greeting cards, but it's always fun to be a little different.
Hopefully next year we'll come up with some new theme to share. Until then... Happy Holidays from our house to yours!
**Oh, and the first photo, our heads are photoshopped on Bing Crosby and Grace Kelly's bodies. I actually went to a hair salon and had my hair teased for two hours for that card. Lots of bobby pins!
Email Post
Labels: holidays just for fun

Stephanie said…
These are so cute and original! I love the streetcar photo.
5:51 PM

Cathi said…
Fabulous cards! I love the cable car one and the Haight/Ashbury one....excellent! Happy Holidays to you and your family! xxoo
5:55 PM

Lizzie said…
Oh, I really love them. I know what you mean by "losing the spirit". I lost my grandma a few years ago and alot of things have not been the same since then. I'm really sorry for your loss. Hugs!
7:57 PM

Jacqueline @ HOME said…
They are brilliant, Lynn.
I just love the one of you two getting off the cable car. It brings back memories of when we were in San Fransisco and I have never laughed so much as when we were on the cable car.
Love these cards, all of them. XXXX
12:05 PM

Daphne Nicole & Lynda Cade said…
These are so cute! I love the dogs dressed up for christmas.
3:13 PM

Mandeep Singh said…
The photo of street car seems to be so antique and original.I just like the way of it is purely original one.
the marcel at gramercy hotel
6:24 PM

melissa davis said…
WOW! What amazing cards you've made over the years... ;) I wish I would have met your grandma- I am sure she was an amazing woman, like you. xx
12:03 AM