A Trip Back in Time 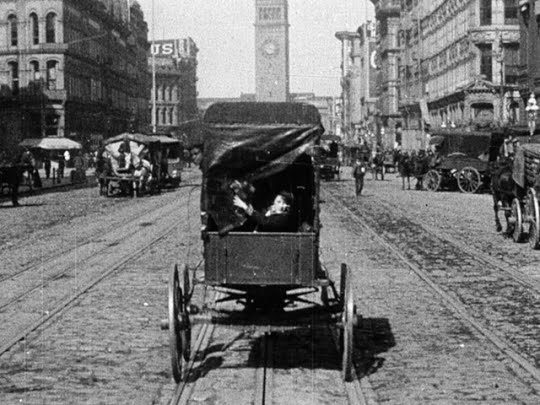 Tonight on 60 minutes they did a segment on the mysterious film, "A Trip Down Market Street." The 11-minute reel of film, shot from a cable car on Market Street in San Francisco, captures a city full of life and promise, which was destroyed only days later in the great earthquake of 1906.


I have watched this film numerous times in amazement. For the first time it's been captured in high definition exclusively for 60 Minutes. It's fascinating to watch the people coming and going, waving to the camera, no traffic rules. A city that in two days would be ablaze from a most devastating earthquake. The faces in this gem of a film had no idea of the fate awaiting them in a couple of days...

Thanks to California archivist, David Kiehn, who took it upon himself to figure out the film's origins. Amazing. If you have 11 minutes of time, be sure and watch this video above from 60 minutes. It's fascinating!
Email Post
Labels: earthquake film historical san francisco

Jacqueline @ HOME said…
Hi Lynn,
That was brilliant. I loved it even more, knowing that I have been there....and so poignant, knowing what was to happen in a couple of days. I think that you took your life in your hands when you crossed the street !! I love the way the cars and people just weave in and out of each other, going about their daily business....parcels under their arms, women, all dressed up, some with white aprons, others in suits, all typical of life in a big city. My favouriye part are the three young boys who seem to know about the camera. That happens today, doesn't it ?
Thanks for showing such a great piece of nostalgia. XXXX
12:32 AM

Nita Stacy said…
That was fascinating. I watched the whole thing in wonder. Those streets were dangerous. Everyone just doing whatever they wanted to do. I saw several people almost get run over during the 11 minutes. What a bustling place. And to think that was only a little over 100 years ago and how much things have changed and yet how little people have.

A Gift Wrapped Life said…
My husband and I watched the whole thing and just loved it lynn! I thought of you. I was reading the book At Home: A Short history Of Private Life just before so I really was immersed in history yesterday. XO
3:58 AM

The French Maid said…
Lynn, I watched this on 60 Minutes last night and thought about your beautiful city. I have never been lucky enough to visit, although my sweetheart is from not too far away. Watching it, wondering who, if any of them survived the earthquake. So haunting, yet so wonderful. What an incredible super slueth he was to determine timing, huh? The project of a lifetime for him, I'm sure.
--Lee Ann
9:53 AM

Beadboard UpCountry said…
I love San Francisco, and you are right this video is amazing....I had missed it...Thanks for putting it on your blog.....Maryanne xo
10:29 AM

Anonymous said…
I watched it before I read your post - and oyu wouldn't believe it, I thought of you!
Or, rather, of San-Franciscans I am acquainted with online...was thinking: this must be 10 times more amazing to them, who know the street or the way it looks now. It's like me and NY - after almost 19 years here I have architectural ghosts populating the city, the shadows of buildings/street signs/stores and streetscape articles that are not there anymore. Imagine how much changed in a 100 years! How many architectural specters collected over every NY corner.

And in case of Market St and the earthquake, it's even more dramatic.
7:06 PM

Paris Hotel Boutique said…
Thanks everyone for your comments. It is quite amazing isn't it? My how times have changed...
5:53 PM

PCovi said…
I think it is thrilling to watch!
I have been obsessed with this one:
http://www.youtube.com/watch?v=n-4R72jTb74
9:38 AM